Ah, anthropologists and linguists; poking the poor with sticks while they try to get on with bashing stones together. Still, fascinating story.

Nepal’s mystery language on the verge of extinction 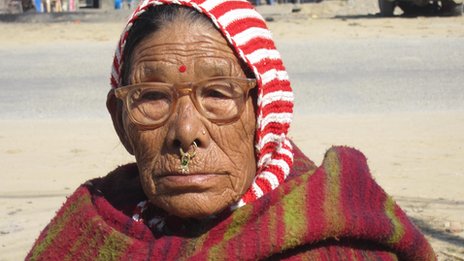 Gyani Maiya Sen, a 75-year-old woman from western Nepal, can perhaps be forgiven for feeling that the weight of the world rests on her shoulders.

She is the only person still alive in Nepal who fluently speaks the Kusunda language. The unknown origins and mysterious sentence structures of Kusunda have long baffled linguists.

As such, she has become a star attraction for campaigners eager to preserve her dying tongue.

Madhav Prasad Pokharel, a professor of linguistics at Nepal’s Tribhuwan University, has spent a decade researching the vanishing Kusunda tribe.

Professor Pokharel describes Kusunda as a “language isolate”, not related to any common language of the world.

“There are about 20 language families in the world,” he said, “among them are the Indo-European, Sino-Tibetan and Austro-Asiatic group of languages.

“Kusunda stands out because it is not phonologically, morphologically, syntactically and lexically related to any other languages of the world.

He warns that if the Kusunda language becomes extinct, “a unique and important part of our human heritage will be lost forever”.

Even if some of the lofty intellectual arguments for preserving the Kusunda language are lost on Ms Sen, she is acutely aware of how its demise affects her personally.

“Fortunately I can also speak Nepali, but I feel very sad for not being able to speak my own language with people from my own community,” she said.

“Although there are still other people from the Kusunda tribe still alive, they neither understand nor speak the language.

“Other Kusunda people… can only speak a few Kusunda words, but can’t communicate [fully] in the language.”

Ms Sen fears there will be no-one to speak the Kusunda language after her death.

“The Kusunda language will die with me,” she reflects, while lamenting the failure of the government and academics to help transfer the language to the next generation.

Although no detailed figures are available, the Central Bureau of Statistics says that only about 100 Kusunda tribespeople remain – but only Ms Sen can speak the language fluently.

A few years ago, there were two other people – from a mid-western Nepalese village – who spoke the Kusunda language fluently.

They were Puni Thakuri and her daughter Kamala Khatri.

But since then Puni Thakuri has died and Kamala has left the country in search of a job.

Ms Sen – despite her age – still ekes out a living as a stone-crusher. But outside of the workplace she finds that she is increasingly in demand from linguistics students wanting to learn the Kusunda language with her help.

They are documenting it in a bid to keep this rare language alive.

Researchers have so far identified three vowels and 15 consonants in the Kusunda language.

The Kusunda tribe to which Ms Sen belongs is nomadic. As hunters and gatherers, they live in huts in the jungle and carry bows and arrows to hunt wild animals.

While the males of the tribe hunt, women and children stay at home and search for wild fruits.

The Kusunda – a short and sturdy people – refer to themselves by the word “myak” in their language. They kill monitor lizards (“pui”) and wild fowls (“tap”).

Linguists and tribal campaigners are now demanding that the government introduce specific programmes to uplift the Kusunda tribe and protect their language.

But no such policy is on the cards, at least in immediate future.

“We do not have any specific programme to preserve this language,” admitted Narayan Regmi, spokesperson of the Ministry of Culture.

The National Ethnographic Museum had meanwhile conducted a study on 10 different Nepalese ethnic groups including the Kusunda.

Its research has reached a grim conclusion. The entire Kusunda tribe is on the verge of disappearing along with its last fluent speaker in Nepal.

Kusunda is one of the most enigmatic languages on the planet. This tongue from western Nepal looks nothing like any other language, and its strange structure baffles linguists. And there’s only one person left in Nepal who speaks it.

Kusunda is an example of a language isolate, meaning a language with no known relative. Of course, this probably doesn’t mean the language developed in isolation – in practice, it means that any connections it might have with other languages are so ancient that its relatives have all either gone extinct or changed so much that any links are no longer detectable.

There are dozens, perhaps hundreds of such language isolates still spoken today, although most are on the verge of extinction. The language most famous for being an isolate is probably the Basque language spoken on the northern border of Spain and France. That said, the 650,000 Basque speakers are utterly dwarfed by the 78 million speakers of the world’s most vibrant language isolate: Korean.

As such, language isolate status is definitely not necessarily a death sentence, but things are looking very grim indeed for Kusunda. The native tongue of a tribe of hunter-gathers in western Nepal, Kusunda was barely known until the 1960s and it wasn’t until 2004 that linguists met Gyani Maya Sen, who is now the last fluent speaker of the language living in Nepal. It’s thought that there’s about six other fluent speakers of the language, but they have either left the country or their whereabouts are unknown.

BBC News has a great overview of the language’s current sad situation and the steps that would need to be taken to save at least the knowledge of Kusunda, if not the language itself. Whether it’s truly worth devoting extensive resources to saving dying languages is admittedly a tricky question that really deserves its own discussion. (I’d personally say it absolutely is worth it, but I can certainly see the counterarguments.) Either way, Kusunda is a language quite literally unlike any other on the planet, and its loss would represent a tragic reduction in the seemingly endless varieties of human expression and communication.

This entry was posted in Articles and tagged Gyani Maiya Sen, Kusunda, Language. Bookmark the permalink.