Unrealistic expectations, or is Baburam the solution?

Posted on 1 September 2011 by NepaliKuire

New Nepalese PM Baburam Bhattarai has spurned the opportunity to travel in a luxurious car and has instead chosen an unglamorous vehicle assembled in Nepal. 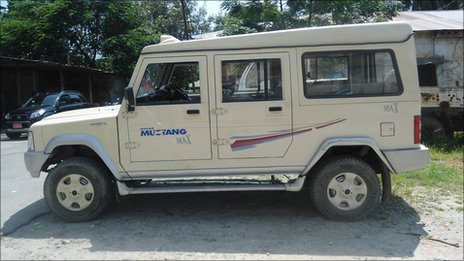 Dr Bhattarai, who was sworn in on Monday, has chosen an unfancied Golchha Mustang as his official vehicle.

Not to be confused with its namesake in the US, the Mustang is made from parts imported from India and China. Fewer than 1,000 have been sold in Nepal.

His decision to choose a Nepalese-made vehicle has won praise from the media.

Ideally suited to Nepal’s pot-holed roads, the competitively priced Mustang has none of the luxurious trappings of previous prime ministerial vehicles.

Its unostentatious reputation, however, makes it perhaps the ideal choice for a Maoist prime minister who has said that one of his top priorities is the eradication of poverty.

Even so, the authorities were a little surprised when the newly elected prime minister turned his back on a lavish sports utility vehicle (SUV) and instead asked to be provided with a Mustang.

Equally surprised were the makers of the vehicle – Golchha Motors.

Dr Bhattarai says that tackling poverty is a key priority

For 14 years they had been quietly assembling cars – including the Mustang and the Sherpa – in Nepal, selling around 1,000 of those vehicles.

Dr Bhattarai’s request received saturation coverage in the media – with many praising him for promoting a Nepali product.

The company is now expecting a marketing bonanza.

It had to rush in a Mustang overnight on Sunday to Kathmandu from the eastern city of Biratnagar – where the cars are assembled – so that Dr Bhattarai could get it in time for his inauguration.

The company has promised to allay concerns about the prime minister travelling in a vehicle without basic security features by delivering a better-equipped model within the next six weeks.

It has dispatched a team of engineers to Delhi to scout for necessary accessories.

According to Surendra Golchha, managing director of the company, Nepali engineers have added their own distinctive touch to the vehicle with parts imported from abroad.

“Our engineers first decide about the design of the body, type of engine and then based on these specifications, selected companies are asked to provide them,” he said.

“They are not only assembled but totally manufactured in our factory. What we have tried to do is learn different technologies from foreign companies.”

The company claims that their vehicles cost less than a fifth of the price of a foreign SUV. It says that it can provide 200 vehicles a year if demand increases.

Industry analysts say that billions of rupees spent every year on importing foreign vehicles could be saved – and hundreds of jobs created – if more of the vehicles were bought in Nepal.

This entry was posted in News and tagged Baburam Bhattarai, Maoists, Prime minister. Bookmark the permalink.